I’ve loved the 1984 TALES OF TERROR album from the first time I heard it. It’s not for everyone, granted – you’ve got to have a decent half-respect for hardcore punk, sloppy glam rock and even a tinge of metal, and/or for the better aspects of what morphed into “grunge” just a few years later.

Here are a few things you need to know:

1. Their story is tragic across the board. Here’s a great article from a couple of months ago in the Sacramento News and Review you’ll wanna read.

2. There’s a documentary film being made about the band as we speak.

Time marches, bellies extend, joints stiffen and responsibilities mount, but one thing remains constant: that 1984 TALES OF TERROR LP is one fucking incredible long-haired punk rock & roll record! These alcoholic Sacramento-rooted bastard sons of ELVIS, THE STOOGES and BLACK SABBATH have aged very well with the passage of the years, and when I plopped on their one and only LP this past week for a couple of spins, it blew me away – again, as it always has. GREEN RIVER? Loved ‘em, but their bombastic guitar & drum roaring never held a candle to this revved-up record, as even Mark Arm would likely admit (they covered this record’s “Ozzy” on their “Dry As A Bone” EP in homage).

This record almost perfectly arrives at the nexus of early 80s hardcore punk and heavy 70s glam, adding a small dollop of 45 GRAVE or MISFITS-style horror imagery which thankfully doesn’t mess up the sound one bit. 45 Grave and The Misfits, bless them both, unfortunately let the spooky goth-vibes seep into their music, employing creepy echoes, ridiculous “ghastly voices from the beyond” and annoying witch-like cackling far too often. Both bands ruled, but it’s hard to listen without switching a judgmental, BS-detecting, post-teenage portion of the brain completely off. Not so with these guys. I used to see “Tales of Terror” spray-painted in men’s bathrooms across the San Francisco Bay Area (especially in bars as I got older), but the dumb-ass mohawk punks in my high school – the ones who regularly made it up to SF for shows, unlike me – just hated them, almost as much as they hated FLIPPER. Loved by the drunks, loathed by the Dead Kennedys-loving high school alternajerks. Draw your own conclusions.

Out of the gates this record is fast, loose and full of swaggering, liquid courage. Two lead guitarists, neither of whom shies from firing off a “fiery” but non-obnoxious lead from time to time, usually over a near-hardcore tempo (“13” and “Deathryder”). The track that everyone loved at my college radio station was “Over Elvis Worship”, about how the spirit of Elvis inhabits singer Rat’s Ass thanks to a well-placed tatoo of the King “down on (his) cock”. As if. But that track – and all of Side 2 – is just incredible raw, blazing and bleary-eyed fun rock and roll. I’ve always been partial to “Romance”, the lead track on Side 2, which is to me the template song for my made-up category of long-haired punk.

Some great fake names for these guys, too – well, “Rat’s Ass” and “Dusty Coffin” aren’t that hot, but what about “Captain Trip Mender” and “Thopper Jaw”? Whoa. There are rumors circulating that CD Presents, who originally put out this LP, are thinking about gathering the tracks and throwing them out there again on compact disc. This is an exciting event, but tempered by the fact that I’ve never read a thing about CD Presents that didn’t present the guy behind the label as an out-and-out crook, loathed by just about every band who ever recorded for him. I know there are some peeps in the audience who saw this band a bunch, and I hope you’ll weigh in posthaste on the majesty that was Tales of Terror. 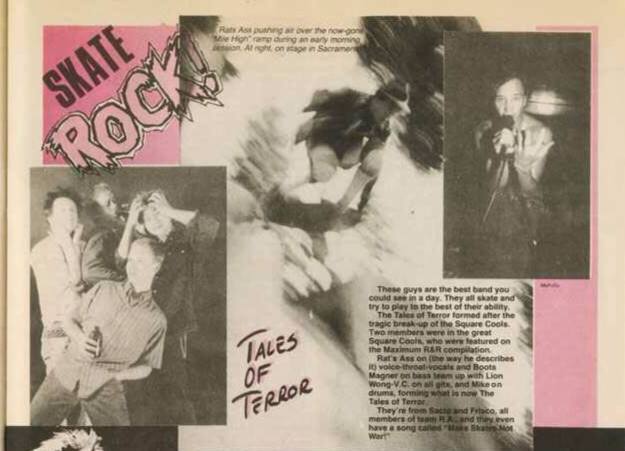 The mighty TALES OF TERROR in Thrasher magazine, early 80s.

Here’s your chance to stream or download Dynamite Hemorrhage Radio #40 – which will be supplanted by a new episode later this evening.

How about we post last week’s podcast again, in case you haven’t streamed or downloaded it yet…?

You can pretty much set your watch by the arrival of a new DYNAMITE HEMORRHAGE RADIO podcast, every two or three weeks or so, give or take a few days on either end. Our newest edition is our fortieth (four-zero; #40) and was recorded on the 4th of July in a place where said day is utterly meaningless and uncelebrated. I’ve been enjoying larding these shows up with new stuff rather than mp3s from my outrageously bountiful mp3 collection (you should see it!), primarily because every two weeks I keep hearing new stuff I think is totally rad. Case in point: THE COOLIES, PIECE WAR, THE YAKKS, DARK TIMES, MEN OH PAUSE, POW!, WOLF GIRL and COLD BEAT – all brand new. All great – or else we wouldn’t play it, right?

There’s also the new reissue of The Flesh Eaters’ “A Minute To Pray, A Second To Die” to contend with, as well as important material that its essential you listen to from Tales of Terror, The Milky Ways, Naked Spots Dance and others. It’s one hour and a few minutes, and it’s available for download on iTunes and Soundcloud and in other spots as well – like right here.

The mighty TALES OF TERROR, live in Houston in the early 80s.

Happy New Year, and hello there ladies and gentlemen. Hung over? Nothing to do today? Howsabout streaming or downloading my music podcast DYNAMITE HEMORRHAGE RADIO right about now? This is the 3rd edition in almost as many weeks. Not sure I can keep up that sort of breakneck pace, but here’s hoping.

This edition, recorded on the last day of 2012, forgoes any sort of best-of-the-year malarkey, and instead plays a mix of the new and the old. Mostly the old. The back-announce parts were recorded while I had a gnarly cold, which I still have, and on a brand-new microphone that I suspect doesn’t add a whole lot to the proceedings, but which made me feel like an important radio disc jockey in any case.

If you missed the first show or the second show, please click on the links to grab’ em! And then download Dynamite Hemorrhage Radio #3 and lemme know which songs most made you want to stage dive and get into fistfights.