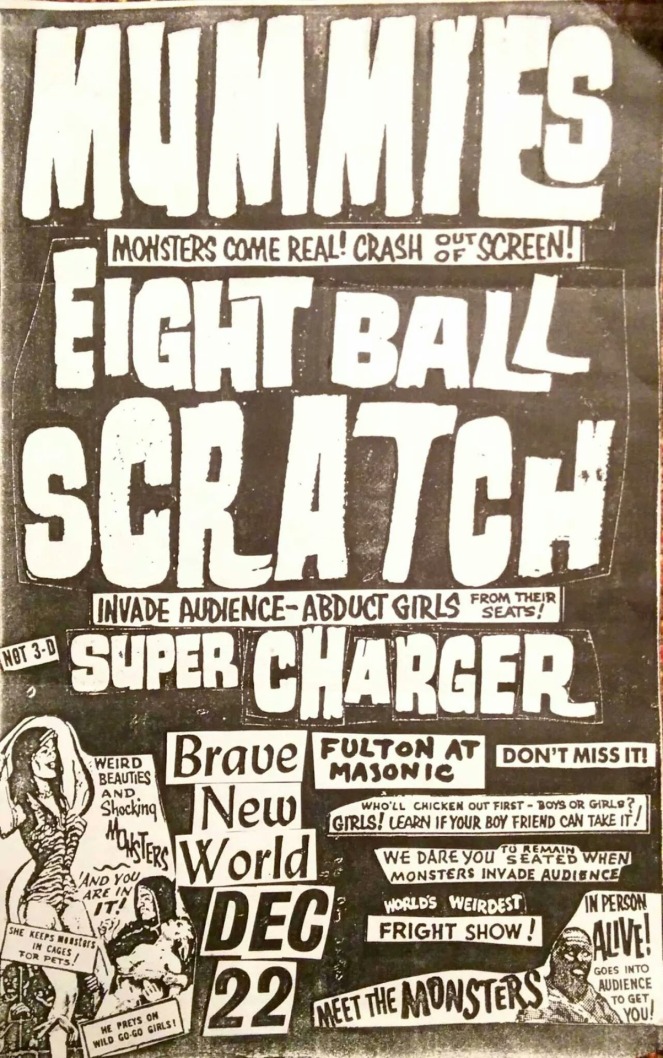 The superior SUPERCHARGER, sublimated even below the vastly inferior “Eight Ball Scratch” and The Mummies, circa 1991 or so. I probably attended this event, though have no knowledge of it remaining in 2014. 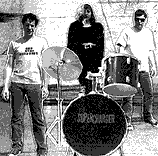 Wrote this about one of the favorites back on my Agony Shorthand blog in 2004….this CD/record in question is available to listen to here.

SUPERCHARGER WERE FAR OUT……

There’s a live recording from the early 1990s making the rounds on this illegal file-sharing site (I’ve only read about the naughty site, I’d never actually use it to illegally download music!!) from SUPERCHARGER, perhaps the hottest raw, punk-infused “oldies” band of all time. It’s from about 1992 or 1993 at the Covered Wagon in San Francisco, and for all I remember of those years, I was there. I enthusiastically saw the band a good 6-7 times around this period, but it’s funny, I always rated their garage revisionist pals/peers THE MUMMIES higher and thus celebrated with the latter upward of a dozen+ times. History – at least my version of history – now says Supercharger were the better band, and this blazer of a live set confirms it. What came off as a bit inept and tentative at the time – a posture nurtured by the band themselves – is full-on wild and overamped energy here, with the usual coterie of screaming girls in the background cheering them on. (These same females were fixtures at Mummies and Phantom Surfers shows during the era, and a few later started The Trashwomen. The apple did not fall far from the tree).

The set is way tighter than I remembered, and each 90-second knockout is complimented mere seconds later by another crashing intro. Oh, and a hippie in the audience gets disgraced in public – always a treat!

Guitarist/vocalist Darren Raffaelli is sorely missed by “the scene” – this guy was a terrific, sweat-soaked frontman, yelping and whooping his way through 50s ramalama oldies and originals that sounded just like 50s ramalama oldies. This live set even contains a version of BUNKER HILL’s masterpiece “The Girl Can’t Dance”, but the band charge through it so quickly you might’ve been lost in your pint while it was playing (at least that’s where I imagine I was). Raffaelli’s last move that I know about was a mid-90s 45 I never heard called “Donny Denim”, to say nothing of his shepherding of THE DONNAS’ first LP (something I’ll spout about in the weeks to come). Greg Lowery, at least, put his post-Supercharger energies toward a hot label and band, and Karen, the drummer? Saw her at Safeway a few years ago in the dairy section.

Yet Supercharger needn’t be lost to history and illegal, immoral file-sharers – there’s a terrific under-the-radar compilation of their 45s that came out a year ago that I highly recommend called “Singles Party”, and if you haven’t heard “Supercharger Goes Way Out”, by all means get on the case!
(UPDATE: now this is embarrassing. This ill-gotten live set that I was so proud of procuring is actually an OFFICIAL release on Lowery’s Rip Off label! Limited edition! Go to it).

I’m doing my best to crank out an hour of music for Dynamite Hemorrhage’s several dozen listeners every two weeks, and mission accomplished this time, with DYNAMITE HEMORRHAGE RADIO #23 coming out just about two weeks to the day from the last one I recorded in Norway (!). This one was able to shoehorn 24 songs in a mere 1 hour, 2 minutes – that’s a lot of short, aggressive songs. As promised “on the air”, I’ll try and mellow out a bit next time.

This one showcases some new stuff from SEX TIDE, RUBY PINS, THE AR-KAICS and FOSTER CARE, along with recent stuff from Pampers and Danny and the Darleans…..then there’s some good olde-tyme rocknroll from The Vidiots, Green on Red, Supercharger, Expando Brain, Liimanarina and yes, The Fuckin’ Flyin’ A-Heads! Feel free to download it, stream it, and consume it however you see fit – and while you’re at it, how about trying some of the other 22 hour-long episodes as well? (scroll down – they’re all there).

Great overview on the demented doofus-rock of South San Francisco’s THE BRENTWOODS, taken from Wipe Out fanzine #9. The band featured Darren and Karen, immediately post-Supercharger, as well as Danielle from The Trashwomen and the resplendent “Patty” on vocals. 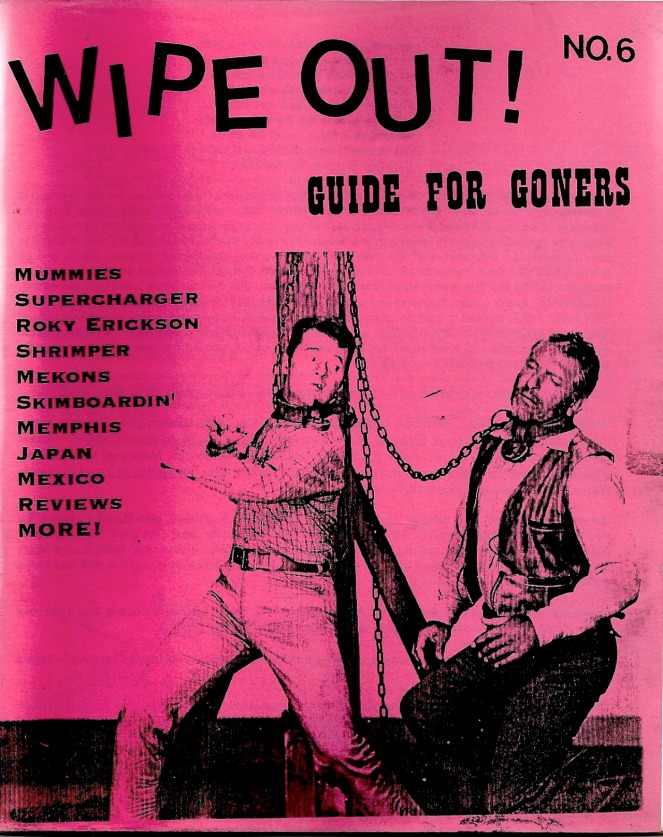 While it’s not the greatest scan my flatbed has ever rendered, it’s a fantastic fanzine from the early 90s – WIPE OUT! #6, penned by Eric Friedl/Oblivian, straight outta Memphis.

Hey, I got my act together and put together a new phony radio show/podcast for you this week, and it’s a brain eraser/mind blower/humdinger of a show, if you ask me. Quite a few new things to play for you this time, with the total show clocking in at just a couple minutes over 1 hour. You can stream it, you can download it – but most importantly, you can take a chance and potentially have the entire course of your life changed by it.

Totally bonzai garage punk classic called “Icepick” from 1992 by SUPERCHARGER, a raw trio from the San Francisco Bay Area whom I got to careen around the room to a bunch of times at parties, warehouse shows and the occasional "club" gig. This is from a 1-sided 45 that Trent from The Mummies put out on his own label in an absurdly limited quantity.