Collage made by SALLY SKULL, originally intended to be in a CD retrospective of their 1990s singles and unreleased tracks that (criminally) never came out. 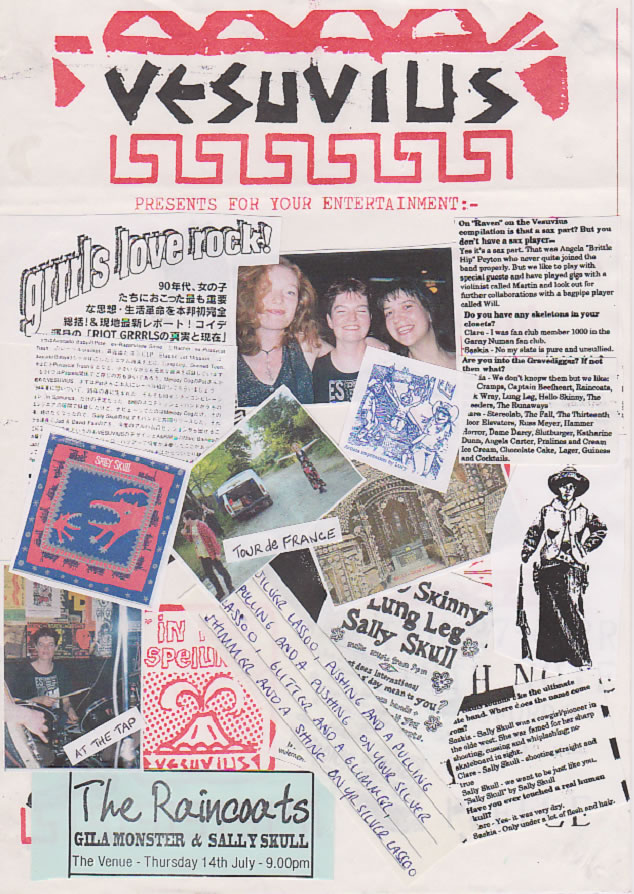 This was a CD insert that was supposed to be on an aborted SALLY SKULL retrospective called “Skullduggery”. By aborted, I mean it never came out, and that 1994-97 Sally Skull stuff is still nearly impossible to find unless you drop a few bucks on one of their two 45s via Discogs.

Of course, you can get the entire backstory on this excellent raw garage/artpunk band via Dynamite Hemorrhage #1 fanzine, which has an interview w/ Claire & Saskia from the band.

INTERNATIONAL STRIKE FORCE were a late 90s UK band who grew out of the recently-disbanded Golden Starlet; while not all their stuff’s top drawer, I’m all-in on the best of their noisy, crazed low-budget art/punk jams, with lackadaisical upper-crust vocals and lyrics. This one’s called “Action Man” is from a split 45 from 2000 with something called Black Cat #13.

GOLDEN STARLET were a British mostly-female band who played an aggressive, loud-punk version of C86 Scottish pop during their brief time on the planet, cira 1994-95. Some might even have called them “riot grrls”. Grrr!

Everything they did’s on vinyl only, and is collected on an LP called “Token Gadgy”. This track comes from their excellent 1994 “Cheap Tartlets” 7"EP and is entitled “Girl’s Gotta Fanclub”.

I have spent a good part of this holiday break sick with a cold, and therefore catching up on home-based projects of a musical nature instead of shouldering my half of the parenting and whatnot. I have digitized a few records I’d recently bought, because I – sacre bleu! – don’t own a real turntable anymore, just one of those USB plug-and-burn things that allow me to turn vinyl into 1’s and 0’s.

I recently roasted up the 1995 Vesuvius Records 10"EP “IN SPELUNCA”, which I paid twenty bucks for in order to have the compleat works of all-female Scottish 90s lo-fi garage pop band SALLY SKULL in my possession. This was the capper, and it contains their first recorded song, “Raven”, which I’m posting for you here. It has a surprising sax addition and a more understated lo-fi bounce than their later two EPs. I hope ya like it.

Played this song on Dynamite Hemorrhage Radio #2, my podcast, which you can stream here and download here, but maybe you don’t have time for all that.

In that case, meet PETTY CRIME. The sum of their recorded history is one 5-song 7"EP on the UK’s Slampt Records in 1998. This one’s called “Mathematics” and it’s a corker. Wound-up, stuttering, female-fronted British speed-punk written in algebra.

Elusive and rare flyer for the elusive and rare SALLY SKULL, probably around 1995 or 1996…? Maybe in Scotland? If anyone knows how I can get ahold of a band member, please drop me a line.

As careful readers of the ‘Hemorhhage know, I’ve been making up for 15 years of lost time and diving in deep to the wild world of loopy late 90s UK girlpunk, pop and noise. The label Slampt – wholly unknown to me before this year – seemed to be a prime mover in a world of their own making, with jarring lo-fi pop and angular punk bands like Lung Leg, Sally Skull, The Yummy Fur, Golden Starlet and others passing through their ranks at various times. We love ’em. Not all of ’em, but we love a bunch of it when we’re in the mood, you know.

Thanks to a blog called PUKEKOS, who are perhaps the only mp3 blog whose files are still active (my old one Detailed Twang also still has a bunch of active stuff, BTW), I discovered the Crampsian shout-and-shriek sounds of BETTE DAVIS AND THE BALCONETTES recently. They too spent some time on Slampt.

Their discography is wobbly and uneven, but a few cacophonous gems totally stand out, like this one, “Surf Surf Kill Kill”, the A-side of a 45 on Damaged Goods in 1998. It sounds like the Maximum Rock & Roll radio show theme song crossed w/ “Golf” by Art Phag, with a bored, drunk English girl spitting out a poetry slam on top. The sleeve also features the best anthropomorphic use of a bear since Monoshock’s “Primitive Zippo” 45, a single that I put out.

My life has been enriched with the recent discovery of this track, “Plastic Cowboy” by Scotland’s THE YUMMY FUR from 1996. The whole album “Night Club” they put out on Slampt that year is in this vein; crooked, repetition-laden garage comedy with an impenetrable Scottish accent. It’s all good, and this one’s the best. “He dance with Indian”.