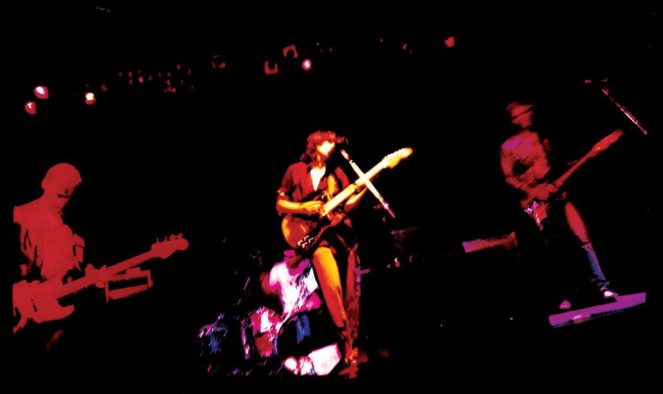 The new 2xCD reissue of COME’s masterpiece 1992 record “Eleven: Eleven” came out yesterday, and is now available in better retail and online establishments. Good for Matador for recognizing what a criminally ignored record this one was, and how important it was that it was reevaluated by a new generation. Despite my having been more of a “garage punk” sort of music enthusiast when it came out (with dashes of indie and arty noise), “Eleven: Eleven” absolutely floored me from the moment I heard it, and, as I’ve said before, it’s one of the two or three best records of the 90s. Now COME are touring in support of the reissue – so check that tour schedule and make sure you’re front and center when they hit your town.

The band, whom I interviewed and put on the cover of my then-fanzine SUPERDOPE in 1993, were kind enough to ask me to write liner notes for the reissue of this album, which I did. Now that it’s officially out, I thought I’d print them here. Brace yourself for hyperbole.

I’ve been waiting for the club of slobbering, I-was-knocked-dead-in-’92 individuals who think Come’s “Eleven: Eleven” is one of the greatest of all possible rock and roll records to grow larger than it already has. It’s never been large enough. The record’s got its proverbial cult status for a few of us, sure, and I know I wear the memory of the two dizzying shows I got to see Come play on that tour like a scene-veteran merit badge. Yeah, there were dozens of bands who blew you & me away in our younger years and whose albums we pronounced as being totally rad for a few months after initial listen, but “Eleven: Eleven” felt like a subdued but howling, pained-birth masterpiece from the word go. It’s remained so for me and for our slowly growing club of dark-worshipping truth seekers. I’m exceedingly hopeful that this reissue will greatly expand our ranks.

Everything about this band, undeniable talents notwithstanding, was mood and feel. They created a near-cinematic vortex of crazed guitar interplay and thumping rhythm section and channeled it into something truly dense and wonderful. You didn’t even have to see them live to easily imagine them killing the club lights by half and then getting deeply lost in their own murky sonics. That’s exactly how it played out, just as the record prophesies. Come certainly weren’t a “Hello Cleveland” sort of band. If they talked, it was a mumbled thanks at best. Their sense of each other’s respective strengths, and how they each played off of & then sucked deeper power from those strengths, is aurally apparent on this record, and that’s what they were clearly focused on live as well.

Thalia Zedek was already a much-revered force of musical nature for both her swirling guitar work and tasted-life-to-its-fullest rasped voice of experience when she came to sing & play for Come in the early 90s, and it’s not shorting her decades of excellent subsequent work to call “Eleven: Eleven” something of an early-career denouement. She and guitarist Chris Brokaw had an unreal ability to interlock and hone in together on bleak, shimmering, whammy-bar-dominated guitar races that were both pulse-rushing and chilling in succession. In fact, those two so frequently used the whammy bars on their guitars, it was like the jangling key to a hidden portal that they just needed to slot correctly in order to drag us all down to places raw and unknown. I had never before, and have never since, seen a band wield the whammy as a secret weapon of jarring, tone-bending sound the way that Come did.

The hard-hitting, tight propulsion of the record, courtesy of drummer Arthur Johnson and bassist Sean O’Brien, also does it a ton of favors for posterity. The thing just plays huge, and its agonizing tension release is kicked up several pegs for not simply being a messy dynamic swirl, but a pounding, raw, firebreather. Eleven: Eleven even feels like a concept record (though I very much doubt this was their intent), as it is sequenced perfectly, from the scraping, burrowing-out first track “Submerged” to the careening, out-of-control climax of “Orbit”. When Thalia’s vocals come rasping in and out of various musical set pieces, it’s like a broader story of some sort’s being told, much like a torch song, except for this torch sounds like it’s in the process of being slowly snuffed out. Check out “Brand New Vein” for the “blues” that this band was supposedly creating, which was oft-remarked on at the time because “dark music” = “blues”, right? It’s cabaret, it’s blues, it’s depressing, it’s dynamic, it’s loud and it’s a total head trip all in one.

As alluded to before, it’s usually a combination of time and consensus that provides a record with its “masterpiece” status, but goddamn it, I just knew with this one. I still spend about every six months with it to this day, and let its cascading rawness envelop me for forty-five minutes – and this is absolutely me-time listening, not to be shared with others – before calling myself satiated, and off to search for the next record that might provide equivalent catharsis. There’ve been previous few, I’m sad to report, and nothing that scraped out the demons and summoned the ghosts the way that “Eleven: Eleven” did. And does.