After a three-week absence, we’re back with another hour of quality tuneage from noisemakers old and new. For once, let’s start the brief recap with the old-timers. Pere Ubu (pictured), Bill Direen & The Bilders, The Dicks, Vacuum, The Creation, The Screamers and the Nig-Heist, anyone? There’s a set of “soft sounds for gentle people” (sorta) in the middle, bookended by new stuff from The Proper Ornaments and Cold Beat. There is other new material from The Nots, Apache Dropout, The Coolies and Dark Matter. In short, there is much to like. 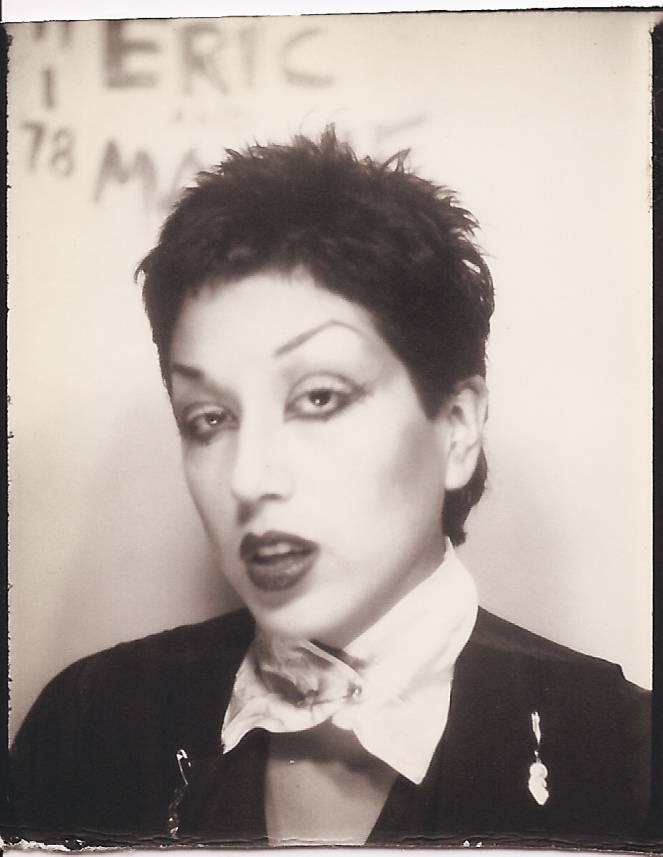 “There was absolutely no way that bands like the Bags, Germs or Screamers would have been signed to
a major label. I still don’t hear anything quite as confrontational as “We Will Bury You” or “Richie Dagger’s Crime” on the radio, no matter what people say about punk being mainstream
nowadays. One thing that will never come into fashion is challenging the expectations of the average consumer.”

Interview we did with Alice Bag on our ancient Agony Shorthand blog is linked to here.

I stayed on the sidelines for the great synth-punk excavation and revival the past decade, preferring instead to stare at my hand or dream of England. Matter of fact, even the much-beloved Screamers, the ancient seminal synthpunk band of yore, went further on attitude, iconography and timing more than they did tip-top songs – but who’s really to say, right? Australia’s AUSMUTEANTS have a synth, and they’re punkers, and no small number of their songs on their debut LP even recall the Screamers, Factrix, Devo and that whole ilk.

Unlike them, their album is tip-top, a breakneck collection of dead-to-rights dance/punk, right in line with San Francisco’s Numbers from over a decade ago, and nearly as good. Song titles like “Kicked In The Head” and “Stepped In Shit” betray the fact that these guys are total wave-os, too, with a few songs that might even be heard on the radio if you fiddled with the dial enough. That’s just fine, because execution is everything, and Ausmuteants can vary it up enough to keep it all exceptionally interesting, brash and fun. Despite a song called “Pissed Myself Twice” that wins this year’s least-likely-to-be-played-a-second-time award, the Ausmuteants record’s one I’m pretty sure you’d better hear. This track’s called “Daylight Robbery”.

I’m a little late sharing this gem from Waitakere Walks with the people, but check out this photo of the harmonizing 1977 LA punk rock barbershop quartet, “The Four Perps”. (I just made that up, riffing on JB’s write-up on The Four Preps).

Left to right, we have Kristian Hoffman from THE MUMPS; John Denny from THE WEIRDOS; Bobby Pyn from THE GERMS, and Tomata Du Plenty from THE SCREAMERS. Apparently they’re backing up Black Randy & The Metrosquad at The Masque. Maybe you were there? 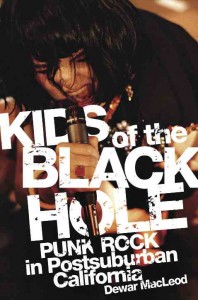 A book about punk rock in late 70s/early 80s Southern California – absolutely impossible for me to resist. I did hold off for three years on Dewer MacLeod’s “KIDS OF THE BLACK HOLE” because, at first flip, it appeared to be a dissertation-level sociological study of suburban evolution in Reagan-era Los Angeles, threaded with warmed-over punk rock history – a history I’m well-familiar with, given that LA punk & its offshoots circa ‘77-’83 is my favorite era of music anywhere, ever. My initial take on this was not very wide of the mark, I’m afraid, though it was just interesting enough – and I mean just – for me to finish it all the way through. It’s not that MacLeod’s a poor writer per se, because he’s not. He just writes like he’s needing to turn this in as a paper to a professor who could never understand the paradigm-busting pleasures of Southern California punk rock, so the book is larded with all sorts of half-baked sociological theory in parts, when it’s pretty clear that what MacLeod really wanted to do was give you a slam-bang killer overview of the music he loved and loves.

So what you get is a conventional start-to-finish chronological story of how LA punk developed out of the glitter/glam mid-70s, exploded in Hollywood, branched out to Orange County and the Valley, got violent and faster, and then fizzled out. What bugs me is how much MacLeod relies on second-hand source material, like old Slash Magazines and the oral histories already written about this scene, and adds so little of his own recollections and stories to it. The interviews he quotes aren’t, by and large, interviews that he did, but rather interviews from Flipside, or Slash, or NoMag. I mean, that’s a book that you and I can write tomorrow, assuming a decent-sized heft to our personal 70s/80s fanzine collections.

I’ll admit, there was at least one new-to-me nugget in here that hadn’t popped up elsewhere. My pal Jerry from Orange County has told me some pretty hilarious stories of a goony early 80s punk rock gang from the small OC suburb of La Mirada called the “La Mirada Punks” – the “LMPs”. They made this book! Hooray LMPs! Chris D. and the Flesh Eaters, one of my all-time faves as well, also merit a couple of short paragraphs, which is a goddamn miracle considering how shut out they’ve been from previous texts. I truly wish there had been more insider dope and less haven’t-I-read-that-somewhere-before moments.

That’s not the worst of it, with all due respect to MacLeod. The book will start talking about hardcore punk pit fighting among bandana-wearing morons at TSOL and Adolescents shows, for instance, and then screech to a halt for an overview of gangs in America – “greasers” and Zoot Suit-wearers in the 50s and so on – to put it all in its sociological context. It’s boring, it’s unconvincing, and again, it reads like a college essay. Then the book gets back on track again with some cool Germs and Black Flag stories or discussions of the Great Punk Scare of 1981, before the cycle repeats itself. In no way would I recommend this book as your intro into LA punk history; for that, I’d follow a path through “Hardcore California”, “We Got The Neutron Bomb”, “Violence Girl” and the outstanding “Lexicon Devil – The Fast Times and Short Life of Darby Crash”. THEN, if you’re not satiated – I’m still not, by any means – then you should find a used copy of this one, and approach with caution.

The recording of 2013’s first DYNAMITE HEMORRHAGE RADIO podcast is now in the books, and it’s all ready to share with the people. This is the fourth edition of the podcast, running at about 1 hour, 15 minutes, and it will take you on a musical walkabout so mind-blowing you’ll never, ever come back. It features underground punk, pop, psych, instrumental and garage-scorch dating from about 1964 to stuff that came out a couple of weeks ago. It’s strung together just like a real radio show and everything, complete with an annoying “deejay”. Only you and I have to know that it’s totally phony, and that the guy who did it made the goddamn thing on his laptop.

Sound appealing? There are three more of ‘em, each about an hour long: