I went to a reunion of “San Francisco’s first and only rock and roll band”, CRIME, over 12 years ago. This review, from my old Agony Shorthand blog, is the story of that night.

My evening started at a high-society benefit/Q&A with “Curb Your Enthusiasm”’s LARRY DAVID, which I had to high-tail it from in order to find a way to crash the massive, big deal, ultra-secret-but-everyone’s-talking-about-it CRIME reunion show.

The Larry David thing was packed with black-clad matrons in pashmina wrap-arounds & 5-inch heels, former mayors, back-slapping titans of industry, and glistening glitterati as far as the eye could see. Obviously I was a tight fit with that crowd, my people. Storming the Crime thing right afterward, I found a great American (CO) had thankfully secured me a rare ticket, and that there were plenty to be had regardless.

Apparently they kept the reunion of San Francisco’s first and only rock and roll band a little too secret, but by the time the band got on there were a bunch of hooters & hollerers amped and ready for ‘77-style action. There was even a posse of awesome leather-clad, mirror-shaded Japanese hipsters right out of the Shinjuku underground & straight off the JAL flight from Tokyo, as there always seems to be whenever there’s a big “garage rock” festival in San Francisco. This was the kick-off night of a 3-day “Budget Rock” fiesta, so let’s quit the gawking and start talking about the rocking.

It was great to see KILLER’S KISS back up this year’s loud-ass 45 with an equally tough set. They’re probably the closest thing this coast has in spirit and approach to the REIGNING SOUND, but with a little more in the way of 60s-style growling & pummeling. One guitarist is all about propelling the song forward, the other about jarring feedback and screech, and there’s a anarchronistic female keyboardist pounding away to make herself heard above the racket. A fine way to get the eardrums in shape and my game face on.

I was really surprised by the SALEM LIGHTS, not simply because that was my Mom’s 1970s brand of choice. These guys reminded me of nothing so much as one of my drunk-era early 90s faves, THE HUMPERS, with a glammy Small Faces/Mott The Hoople overlay to big, bombastic, meaty hooks. Another blow-the-sockets rock band, one with one killer crunching song often another. I thoroughly enjoyed them with only a mere sheet to the wind, and in response to the inevitable question – were they simply a “middle band”? I say no way! I’m calling in my pint orders ahead of time next time these guys hit a local stage.

I’ve vacillated on my I-don’t-do-reunion-shows stance after seeing Mission of Burma a couple times, but after CRIME’s flat, lackluster set I’m thinking of clamping the lid back on. I figure these guys – these Crime guys – really don’t deserve a ritual flogging; I mean it was 2/4th of the godlike legends CRIME, right, and you have to throw out some big props just for trying to give it another go. But perhaps it never really dawned on me just what an outstanding guitar player the deceased-since-1996 FRANKIE FIX was, and how that patented ungodly wailing guitar sound was his & his alone. JOHNNY STRIKE, bless him, was and remains a competant rhythm guitarist, but you lose Fix’s incredible 3-second leads (leads that make tracks like, oh, say “Hot Wire My Heart”, unlike any punk or rock & roll band ever) and you lose a LOT.

They also did “Murder By Guitar” and “Piss On Your Dog”, and maybe another one from the olde days, but it appears this new Crime are going to give the reunion thing a real college try, and that this was the first of several shows to come. Thus, they’ve written a whole suite of new songs, none of which stuck out as particularly memorable nor annoying – songs that just sort of flopped around on the floor begging for attention.

And despite being lucky enough to share a stage with Johnny Strike and Hank Rank, whose hour this really should have been, the garrulous bass player kept bleating about “We’re gonna” this and “We are Crime” that. Dude. A little respect! I too once dreamt I’d be standing up on stage as Ron The Ripper, but in my sweat-bathed dream, I kept as quiet as a churchmouse and let the real warhorses bask in the glory they’d earned. So hey, call it first-night jitters or maybe the soft bigotry of high expectations. I truly applaud Johnny & Hank for getting out there on the rock campaign trail again, but I think I’ve seen what I needed to see of the 21st Century CRIME.

My favorite band in San Francisco around 2001-03 was NUMBERS, by a mile. Such a blast. Here’s a video of them that just surfaced to my attention, from March 2002. Watch the kids go bananas.

RAKTA (top) and MANE (bottom), live last night at The Hemlock Tavern in San Francisco, CA. Thanks to Chris S. for the photos.

THE DILS, Communist poster boys for “New Wave New Weapons”. Front page of a 1978 San Francisco fanzine that doesn’t seem to have a name. 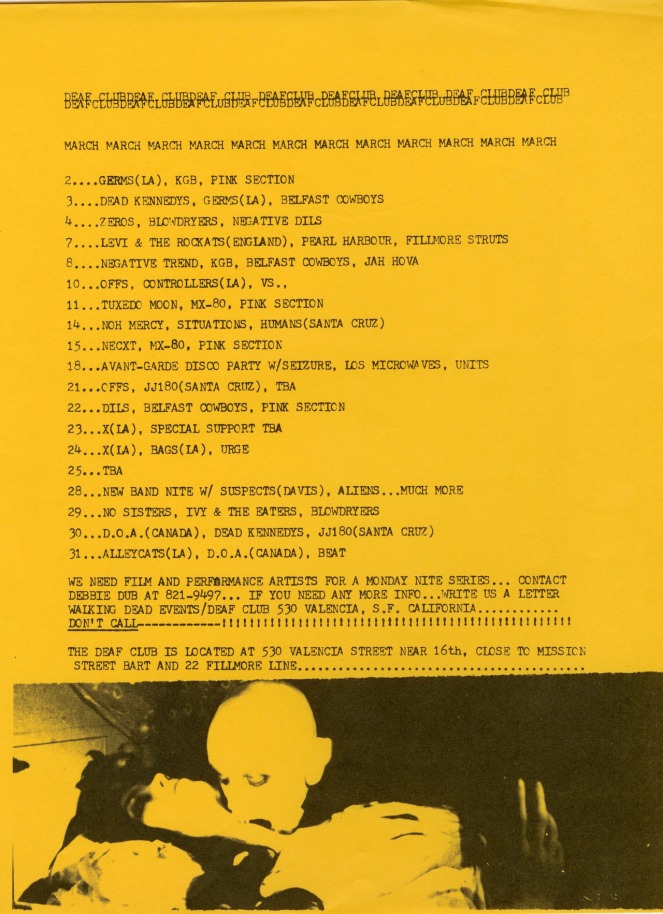 March 1979 at The Deaf Club, San Francisco. Easy to imagine going to at least ten of these gigs.

This is one of those listening “projects” of mine that lie in a netherworld somewhere between pure entertainment enjoyment and painstaking scholarly research. It’s one that I’ve been eager to “tackle” for some time. I finally got around to active listening of all three of the heralded VELVET UNDERGROUND “Quine Tapes” discs in their entirety this past week, and like just about everyone else who’s heard them, I am very, very impressed. The Velvet Underground come away from the experience sitting in the fabled catbird seat for all-time great rock bands, right where they were perched a week ago.

The word on the street was that these were the very best of the Velvet Underground live tapes out there, far too good to only circulate on bootlegs, and deserving of a proper release. In October 2001, Polydor Records did just that. I have to agree that they’re among the best I’ve ever heard, up there with “Sweet Sister Ray” and “The Legendary Guitar Amp Tape” and some of the great rehearsal material that surfaced on the “Peel Slowly And See” box set. What makes these CDs special is that this is truly the Velvet Underground at their unadorned, most rocking best, not subject to anyone’s agenda for track listing or to shoddy recording techniques (though Robert Quine’s tapes are a bit RAW). It’s really just one young law student and a tape recorder, taping up his #1 favorite band like the seer, visionary and public servant he was.

In researching this collection on the World Wide Web, I read a couple of instructive reviews that capture some good insights on the set. This is from Jonathan Moscowitz in the New York Press:

“Quine’s tapes were made right before the Velvets went into the studio to record Loaded, an experience so negative it made Reed quit the band and move back home to Long Island. You can hear that sound foreshadowed in the versions of “It’s Just Too Much,” “Ride into the Sun” and “Follow the Leader” offered here. Good-natured and bouncy, they show off Reed’s love of old-school rock ’n’ roll and Sterling Morrison’s effortless rhythm work. At the other end of the spectrum sit the old Factory-era chestnuts “Venus in Furs” and “The Black Angel’s Death Song.” In their original incarnations both these songs were built around Cale’s heavily droning viola, and it’s instructive to hear how well the band evokes the junky creepiness of their first album without him.”

These shows were recorded in late 1969 at a large hall (The Family Dog) and a small club (The Matrix) in San Francisco, as well as the basketball gym at Washington University in St. Louis, thus illuminating the band in both spacious and intimate environs. There appear to be some extremely small, uninterested crowds in attendance, and the sets, as Moscovitz says, lean heavily to “Loaded” and third album material. There’s also a few big eye-openers: “Follow The Leader”, long considered a “lost” and highly sought-after VU song, is probably not worth much further hype as it’s a middling chugger that goes on about 10 minutes too long, clocking in at a robust 17:05. Yet nothing compares to the not one, not two, but THREE wholly unique versions of “Sister Ray”, one sitting on each disc.

You really think the Velvet Underground were the antithesis of the hippie scene? This set gives one pause. Rather than coming in blazing with posturing and standoffish black-leather New York hipster ‘tude, the Velvets instead adapted to their San Francisco environs quite well, and cranked out lengthy instrumental passages that sound like any typical free- form band of the period (just better). Quine says of the November 7-9th 1969 shows, “The first weekend, at the Family Dog, it was basically just a bunch of hippies there. They brought their tambourines, harmonicas, and were playing along. I made tapes of that stuff that came out very well. It was a large place, so they could really turn up the amps. The versions of “Sister Ray” are especially terrific if you’re willing to smoke a fat doob and sit back and feeeeeel them. Built around one of the all-time great riffs, the song has so many different piece parts that it’s really 12 songs in one – now multiply that by 3 different versions (one slow, one hard, one that morphs into an excellent “Foggy Notion”) and, well, 12 cubed = 1,728 different combinations and ways of playing “Sister Ray” on any given night. Quine captured three of them, and they’re fantastic.

There’s also a brilliant distorted version of “What Goes On” and two incredible “I’m Waiting For The Man”s – one gentle and jaunty, one dark and mean. The banana really does peel down to the base once you’ve tackled all 3 discs here, and I’m left with a much better picture of the Velvet Underground live experience than previously captured on various bootlegs. I’m confident that no two shows were identical, and that this was a band well worth slavishly following the way Quine obviously did. In sum, this small box set is essential for those who feel it important to dig deep into Velvet Underground arcana beyond the 4 LPs, the 2 posthumous LPs and the “Peel Slowly” box set. We are a limited crew, granted, but we make up in fanaticism what we lack in self-restraint – an endearing quality for Agony Shorthand readers and those few people who love them.

Order back issues from our online store.