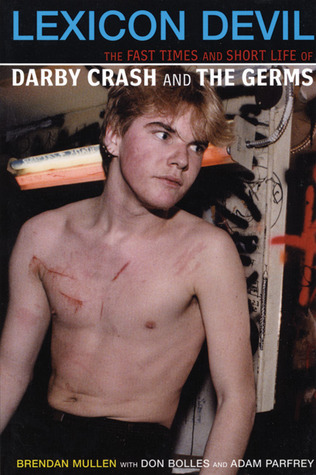 (I wrote this review ten years ago for another blog. Still one of the best music books of all time).

“LEXICON DEVIL: THE FAST TIMES AND SHORT LIFE OF DARBY CRASH AND THE GERMS” by Brenden Mullen and Don Bolles…..

About three months ago I finally devoured this book in a single 6-hour plane trip to New York, and at the conclusion of my journey I declared it to be one of the Top 5 rock and roll books I had ever read. I was so excited about this oral history that I was going to write a 10-paragraph oratory of my own about it for Agony Shorthand, imploring you to read it and enumerating all the reasons why you should do so immediately. Well, I plum forgot what I was going to write, and don’t have the book on me right now to jog my memory, so here we are.

I think the reason I didn’t jump on this when it came out a few years ago is because it was released mere months after BRENDEN MULLEN’s LA punk scene oral history “We Got The Neutron Bomb”, a large chunk of which concerned The Germs and their effect on Los Angeles and the greater American punk movement. Reckoning that “Lexicon Devil” would be a mere expansion of the stories told in “Neutron Bomb”, I resolved to read it in a couple years’ time. Maybe that made “Lexicon Devil” that much better, I don’t know, but where “Neutron Bomb” was merely an adequate retelling of the greatest punk rock scene in the history of the form (Los Angeles 1977-83, baby!), this book is sooo much more.

“Lexicon Devil” takes the story of Darby and Pat (Jan Paul and George) and positions it against the broader freakiness of the 1970s, and does so masterfully. The very best chapter in a book packed with incredible stories is the tale of their alternative, Scientology/EST-like high school-within-a-school at University High during the mid-70s, an experience so warped and beyond comprehension you have to figure those teachers would be behind bars if their tried their hippie mind-control BS on the school kids of today. But it sure made a man out of Jan Paul Beahm, hunh? He took these formative learnings, combined them with massive amounts of drugs & alcohol, and a deeply-repressed homosexuality that, in 1977, was definitely very uncool, and created the “Bobby Pyn” and “Darby Crash” characters of legend.

What I loved about the book, though, was just how well the interviews were threaded together to tell a much larger story than that of The Germs. Existing as it did on the edges of Hollywood flash and cash, there are many stories of the punks’ rubbing up against movie idols or mainstream rock folks and the sometimes inevitable troubles than ensued. The whole book is filled with the most seedy and depressing characters imaginable. Of the ones still alive, like the reprehensible “Gerber”, you get to read their puffed-up yarns from the old days, and almost feel drunk with enthusiasm for their heedless youth & reckless stupidity as a result. I mean, these kids were answerable to no one but themselves – very few had jobs, all were either alcoholics or drug addicts (with a few notable exceptions), and they rocked 24/7 to some of the great bands of all time – WEIRDOS, BAGS, GERMS, DILS, X, MIDDLE CLASS, FLESH EATERS etc. – and all had wild sex with each other and each other’s friends. Doesn’t that sound like a blast? Of course it does, except when you’re creeped out & repulsed by the goings-on described herein.

Characters who were very much in the center of things, like BLACK RANDY and DAVID BROWN, get their stories told better than any other account to date, and this in a book ostensibly about The Germs. Amazingly, Don Bolles comes across as the voice of reason and normalcy in this book, and as anyone who’s met the guy will tell you, those are not words that leap to tongue in his presence. But he’s a survivor, and as cliché as that might sound, once you read the accounts of the crazed lives the first-wave LA punks lived, you develop a newfound respect for the resilience of those who came out with their brains intact, and continue to play music or contribute in other ways to this day (hello, Alice Bag and Chris D.).

Darby, of course, did not, and this book does an excellent job letting others put him on the posthumous therapist’s couch to try and dissect what went wrong. I can’t recommend “Lexicon Devil” highly enough – it’s a riveting read, and can even be appreciated by audiences far removed from the rabid LA punk admiration society. 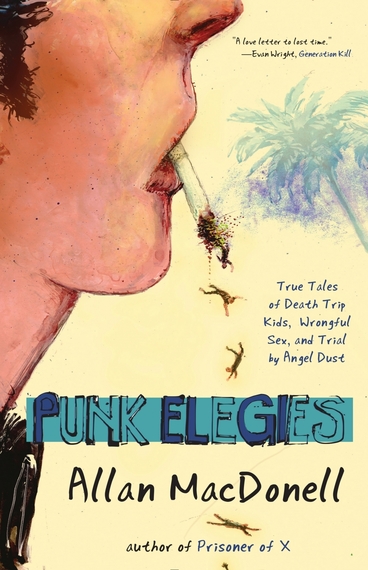 Currently reading this new book and am enjoying it greatly.

MacDonell writes a self-effacing story of his blurry punk rock coming-of-age in LA punk’s first wave, circa 1977 and beyond. He writes for Slash, he befriends Black Randy, he passes out on his own front lawn.

Read a full interview with the man here, and pick up the book here or here.

*** Update on July 30th: I got really tired of this book in a hurry. Never mind what I said earlier. Here’s what I wrote on GoodReads:

This started out with a bang, and I was all-in….and then quickly descended into a litany of “I was so wasted” drug stories, one after the other, ad nauseum. Really, is there anything more boring that someone’s drug memoir? It gets extremely tiresome about halfway in, by which point I’d lost all my interest and was totally deadened to this guy’s mistakes and motivations, which seemed to revolve around destroying himself as quickly as possible, while making everything into a “party” no matter the day or hour.

The connection to the ‘77-’78 LA punk scene – which is what I though this would be about – is tangential. MacDonnell’s PCP freakouts and blackouts take place at or near The Masque, Whiskey, Canterbury House and so on and so forth, but it’s more an insight into one man’s drugged-out stupidity than it is an illumination into anything new or different that we don’t already know about that scene or era. Music is barely existent in this book and resides in the background of dozens of drug stories. Huge yawn.

Well, this is something of a find – a good-quality audience tape of the very first FLESH EATERS show at Los Angeles’ Masque in December 1977…! Are you kidding me? I would have given my right arm for this thing at any point during the past 30 years, and it’s just been sitting there since May waiting for all of us to listen to it.

Thanks to Jon Hope for hipping me to this site Noise Addiction II – I’ve barely even dug through it yet and have already found that the site is just bursting with LA punk and oddities from the 70s and 80s. Don’t mind me, I’m over here shoving files into my piehole.

So the Flesh Eaters, in their very first show, still sound searing and raw on most tracks. This was from Chris D.’s “screaming” phase, which you can read him disowning in our own Dynamite Hemorrhage #1 fanzine, which has a lengthy interview with him about this era. The tape contains their cover of the Magic Band’s “Plastic Factory” as well as another cover I can’t place right now….can you? The tape cuts out just as the monstrous “Automaton Bombs” is just getting locked and loaded.

I can help a little with the song titling as well. Minus the one I don’t know, here’s what you’ll hear:

BLACK RANDY & THE METROSQUAD, from the insert that came with the Dangerhouse complete 45s collection put out on 2xCD by Munster Records.