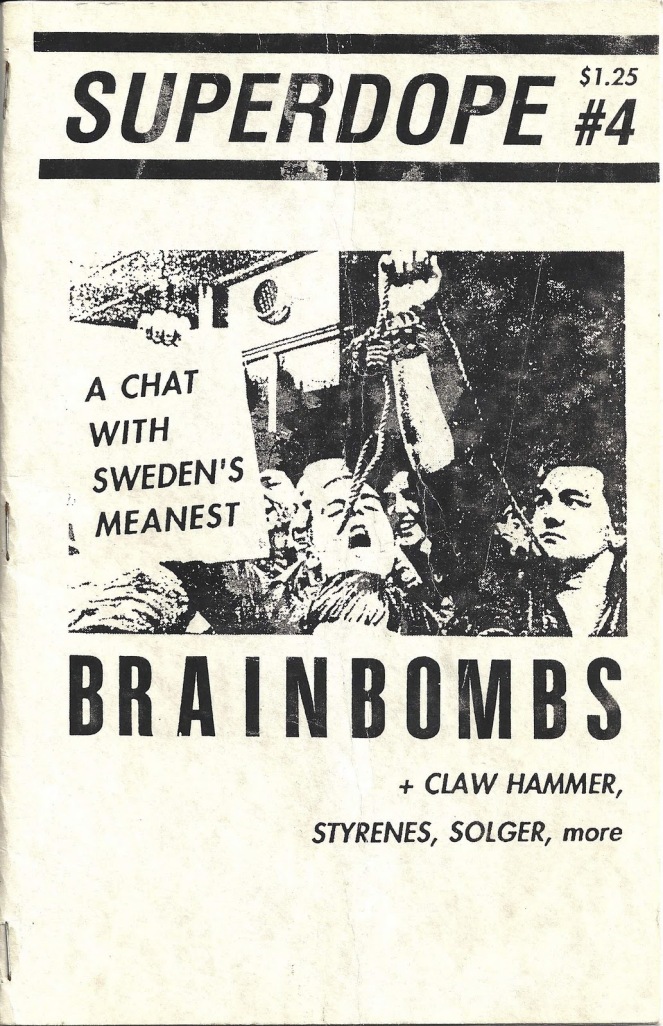 Of the 8 issues of SUPERDOPE fanzine that I self-published in the 1990s, this fourth issue from Summer 1992 probably had the lowest print run and is the most “rare” (which is not to be confused with “desirable”). If anyone’s been waiting to read it, and has been bidding up the price of any copies that make it to eBay (this truly happens with some of Superdope’s back issues, which is amazing to me), well, here you go. It’s so rare that I only have one beat-up copy myself.

This came out only about 4-5 months after SUPERDOPE #3, which you can download here. Like that one, it was a small-format ‘zine I pumped out very quickly, run off at some long-gone printer on Fillmore Street and distributed mainly at Tower Records stores, local San Francisco record stores, and See/Hear in New York. I got more serious (again) with the subsequent issue, but I’m getting ahead of myself and will post that one presently.

A few thoughts about this one:

• The contributors this time were Doug Pearson – a local pal who, until recently, was front & center at every single rocknroll show I went to, leading me to believe that for every show I attended (which is one every 6-8 weeks, maybe?) he was holding court at twenty – and Tom Lax, then as now the proprietor of SILTBREEZE records. I wrote the rest. I knew of Lax as a writer first, before he started the label. His stuff was funny, deeply knowledgeable and intensely aware of every sub-movement and sub-sub-movement in every forgotten crawlspace of underground rock, in every nook & cranny of the globe. When he still writes for his Siltblog, which is unfortunately infrequently, it’s essential reading. I thought it was a “pretty big coup” that he felt Superdope good enough to lend his name to.

• Though THE BRAINBOMBS interview was the first attention they ever really got in the US or elsewhere (I had been blown away by that “Jack The Ripper Lover” single), I’m not all that happy that I furthered their legacy, such that it is. I’ve come to see this hate/kill/blood music as stunted children’s music. It’s something that underdeveloped twentysomethings appreciate, but like Freddy Kreuger and Che Guevara, also something that is easy, and relatively painless, to “age out of”. When the otherwise right-on Z-GUN magazine, put out by intelligent thirtysomethings/fortysomethings who should have known better, did a frothing, multiple-contributor “Brainbombs tribute” in one of their 2010 issues, it struck me as totally preposterous. Smart people, with highly-developed BS detectors, praising a band who sings about mutilation, child rape and torture, like it was somehow bold, daring and shocking. What’s shocking is that anyone could be intellectually stunted enough to still get a thrill off these mental pygmies. Mea culpa. I made a mistake giving these guys any press beyond a record review or two, despite the musical thud of their early 45s.

• 1992 was obviously a very good vintage for raw and exciting underground rock. Looking at the then-new records we covered in this one – Night Kings, Claw Hammer, Sun City Girls, Cheater Slicks, Thinking Fellers, Venom P. Stinger – I’d have to mark this particular year as my “peak” for intense music & record adulation. The stuff we covered was better than in previous issues, and the records we praised are more lasting (“The Woggles” – wha? – notwithstanding).

I’ll be back in a few with three of the final four issues we published.

Order back issues from our online store.