(Originally posted on my Agony Shorthand blog back in 2005)

Hands down the best record of BILLY CHILDISH’s exceptionally prolific career. I went hog wild scarfing up MIGHTY CAESARS vinyl in the late 80s/early 90s when the first Crypt best-of compilation turned me onto these guys, and at one point I think I had the entire discography before Thee Headcoats went off the deep end and tossed off onto the public every fart & titter committed to tape . This one from 1987, all 19 minutes of it, was by far the boldest and most raw thing this very bold & raw trio put to vinyl, featuring early wide-groove, near-45rpm versions of hits like “She’s Just 15”, “Devious Means” and “I Can Tell”.

This is when Childish & co. were deepest into their LINK WRAY fixation(s), so among the 10 tracks are incredible, hotwired versions of “Comanche” and “Run Chicken Run” – the former is so booming & loud I’d venture to say I’d even take it over Link’s version. Also features a thumper of a run-through of THE TROGGS’ “I Want You” and several other fantastic originals that never made it to later best-of comps (to my knowledge), like “The Bay of Pigs” and my fave, “La-La, La-La, La-La-La” (easily one of the Top 3-4 Caesars tracks ever).

It’s a band that’s not difficult to forget about sometimes, given their daunting discography and near vanishment from the historical record, but man, if someone was wise & prescient enough to re-press this thing, I can think of a lot of ears that’d wanna hear it. 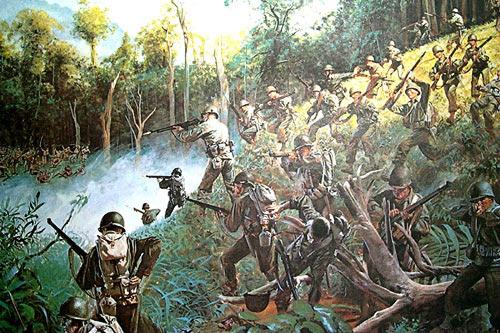 Thought I’d dash off another radio show/podcast for you to make sure your week was stacked with fantastic tuneage from the underground….this one’s just over an hour, and is Edition #11 of theDynamite Hemorrhage Radio Podcast, which is streamable and downloadable at the links below. Somehow I jammed 25 songs into 60+ minutes; some of ‘em are dumb, some of ’em are fast, some of them are edifying and artful and totally mind-expanding. Some may blow you from here into the next century. If that happens, please let me know, OK?

I truly don’t know much about THE GUARANTEED UGLY. They were associated with Billy Childish and the Hangman label for a while, and their first album (which I don’t have, yet need to have) came out in 1995 and featured this savage track. They were from the UK, had a couple releases on Sympathy in the US, and pfft – that’s all I know (right now).

“Fire Escape”, this track, is severe in its use of volume and throat-scraping vocals to invoke a Pretty Things/13th Floor Elevators hybrid gone seriously off the rails. Best listen on your headphones. NSFW.