(Originally written on my Agony Shorthand blog in 2005…)

A wild, borderline-inept, off the rails Finnish pseudo-hardcore record from 1983. I’ll take it! There’s a reason that record collecting scum have been scouring the auction sites for THE RUTTO’s debut of late. Now that I’ve heard the whole 6-minute package instead of just its kickoff track “Ma Vihaan”, I’m really floored by it. It’s just a massive wallop of sound, featuring a high-pitched Greg Ginn-like feedback whine that preludes every track, and a pummeling, fuzz-heavy guitar that brings almost as much steady intensity as Ginn did to tracks like “Police Story”or “I’ve Heard It Before”.

The female vocalist has this vessel-bursting vocal scrape that sounds like she’s attempting to spit up all 5-6 vowels at once – then again, perhaps that’s just the Finnish language for ya. She’s a real hoarse shouter nonetheless, and her amateur take on “singing” is in line with the rest of the DIY pleasures to be found on Rutto’s debut. Each of the 5 tracks buzz at a steady mid/high-tempo pace and don’t vary for 7/8ths of the track, yet all sort of fall to pieces at the end and stop, rev up again, and finally collapse into chaos. Fans of SOLGER, TEDDY & THE FRAT GIRLS and the motherf***in Flag themselves will be impressed. Get it on your dorky want list ASAP.

Listen to the whole thing here.

NEGATIVE APPROACH, live (full set and goofin’ interview!) in 1982 on the “Why Be Something You’re Not” cable access TV show.

The Pedestrians – Looking Out My Window

Excellent 1982 UK DIY from Bona Dish, with that gauzy minimalist shimmer so common to this era of weird, distant, micro-underground 45s of the day. 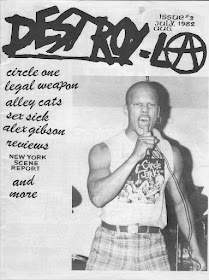