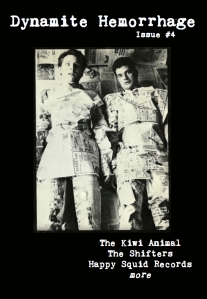 Back issues of Dynamite Hemorrhage fanzine have become awfully scarce all of sudden, with Dynamite Hemorrhage #1, #3 and now #4 having sold out. Thanks to those of you who ordered, sold or otherwise read them. #2 and the newest one, #5, are both available to purchase here.

I’m a big believer in keeping this stuff out there for those who might have missed out on physical copies, so here’s where you can go to read (and download a PDF of) Dynamite Hemorrhage #4.

This one featured zero ads and no contributors except for Jay this time. It also featured the following: