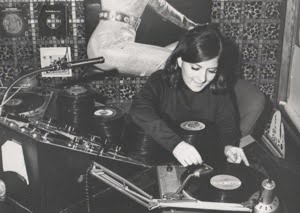 The single best music radio show I’ve heard since Mr. John Peel’s reign – or at least since my own – comes to an end tonight. Erika Elizabeth, whom I interviewed here, has been hosting “Expressway To Yr Skull” on Amherst, MA’s WMUA for about eight years now. She’s moving to the Northwest and taking her record collection with her, with the express promise of creating online-only shows on her laptop, which we need to aggressively pressure her to fulfill on if the shows don’t start hitting her website by, say, mid-August – what do you think?

I only discovered the show in 2011, but it really has been a game-changer for me & my ever-evolving rocknroll music tastes. As I wrote when I interviewed her, “Her record collection, and her ability to wield it like a weapon of knowledge and truth on-air, is phenomenal – and it’s all employed at a perfect intersection of deep-underground pop; 70s-80s British DIY and postpunk; 90s shoegaze and twee (stuff from lost 45s and cassettes that no one’s heard for two decades, I’m serious); garage punk; and a lot of noisy girl-helmed bands that had been lost in a patriarchal fog of several decades of disregard.”

The final show’s on tonight at 8pm Eastern, 5pm Pacific, and you can listen here. Thanks to Erika for being such a rad tastemaker, and a big fare thee well for the upcoming move.