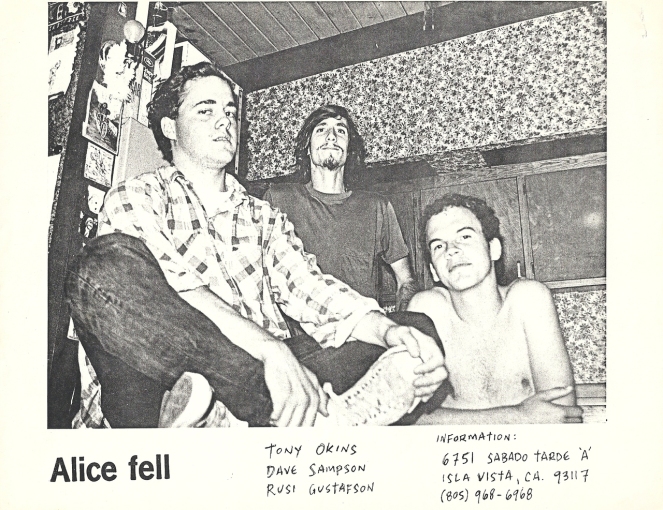 Two of these three individuals were my roommates circa 1988-89, and their band, ALICE FELL, were widely considered at the time to be the best our college town of Isla Vista, CA had to offer – and the ones poised for eventual success beyond the boundaries of Del Playa and Sabado Tarde Blvds. Ironically, MONOSHOCK sprang from this scene as well, and though it couldn’t quite be seen at the time, they ended up having an impact on multiple folks’ musical development even beyond US borders. Rad.

Alice Fell were were a heavy indie band with one foot in “Workingman’s Dead” and the other in “VS.”, though no one in the band claimed an affinity with either the Grateful Dead or Mission of Burma. They were all into SST stuff, Neil Young, some hardcore punk and even tripped-out krautrock before anyone cared about that stuff. They even nailed a couple of opening gigs with The Lazy Cowgirls in Los Angeles around that time, which we thought was pretty big-time. Great guys, great music, and they never recorded a thing. May their legacy live on in the hearts and minds of those who loved them.